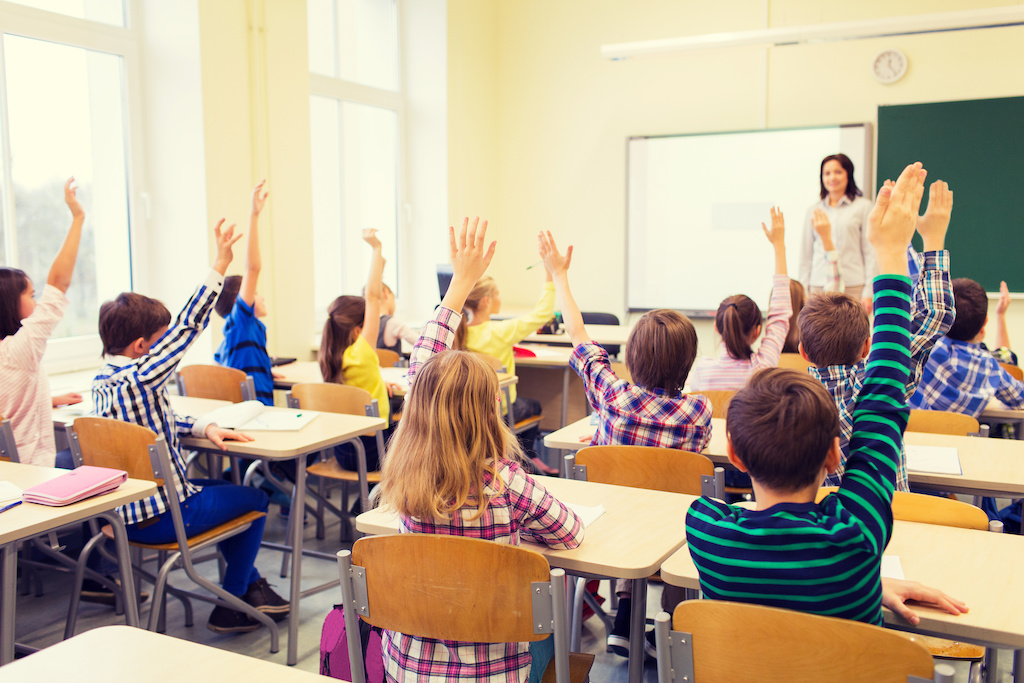 WASHINGTON, D.C. – Today, America First Legal (AFL) and Wisconsin Institute of Law and Liberty (WILL) joined forces to file a ground-breaking parental rights lawsuit for Parents Protecting Our Children, UA against Eau Claire Area School District, Wisconsin, its school board members, and its superintendent. AFL and WILL seek to vindicate parents’ sacred and fundamental right to care for and raise their children and to exercise their religious freedom free from the political and ideological agendas of woke school districts and other government entities.

The lawsuit, filed in the federal district court in the Western District of Wisconsin, alleges that the Eau Claire Area School District (ECASD) formulated a “Gender Identity Policy” and is carrying out gender identity training with all the District’s schools and teachers, who will, in turn, impose this woke agenda on innocent school children, all while mandating these teachers and schools hide this critical and sensitive gender-related information from parents in violation of the United States and Wisconsin Constitutions and the federal Protection of Pupil Rights Amendment. In so doing, the ECASD violates the rights of parents to parent and guide the welfare of their children and to freely practice their religious beliefs.

Plaintiff’s complaint meticulously lays out the ECASD’s secret, ideologically-driven gender identity policy, including enabling school children to be called by a different name and use intimate facilities meant for the opposite sex through a “Gender Support Plan,” all without parental notification or consent. This Plan includes the following questionnaire: 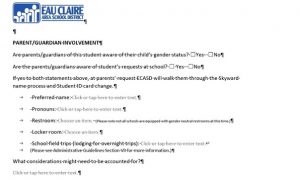 ECASD has also made it abundantly clear to its teachers that “parents are not entitled to know their kids’ identities. That knowledge must be earned.” ECASD also created a “Facilitator’s Guide,” which helps facilitators during teacher training. It states that parents’ objections to the “LGBTQIA+ agenda” will likely be as a result of parents engaging in the “weaponization of religion against queer people,” and that teachers “must not act as stand-ins for oppressive ideas/behaviors/attitudes, even and especially if that oppression is coming from parents.”

In fact, so driven to impose its woke ideology on innocent children while concealing the District’s agenda from parents, ECASD required its teachers to attend a training session titled Safe Spaces Part Two, where the facilitator, Christopher Jorgenson stated: “We understand and acknowledge that teachers are often put in terrible positions caught between parents and their students. But much like we wouldn’t act as stand-ins for abuse in other circumstances, we cannot let parents’ rejection of their children guide teachers’ reactions and actions and advocacy for our students.” In one classroom at North High School, a teacher followed ECASD’s instructions, displaying a poster in class stating: “If Your Parents Aren’t Accepting of Your Identity, I’m Your Mom Now #freemomhugs.” 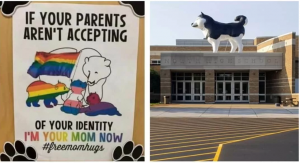 ECASD’s agenda violates the federal and state constitutional rights of parents. That a school district would have the audacity to hide sensitive physical and emotional information about students from their parents shocks the conscience. Parents do not relinquish their constitutional rights when their children enter the doors of their public school. Instead, all parents have and retain the fundamental right to care for their children, to raise them according to their family faith and values, and to be notified before a school begins psychological or psychiatric testing, indoctrination, and treatment of their children.

America First Legal is proud to partner with the Wisconsin Institute for Law to bring this case on behalf of Parents Protecting Our Children, UA. WILL has been engaged in this battle for years, and AFL is grateful to bring its additional expertise to this crucial fight.

AFL will not stand by as school districts across America, such as the Eau Claire Area School District, violate parental rights. Instead, AFL will continue defending parents’ fundamental rights to be the primary decision makers regarding the health, welfare, and education of their children. These rights are sacred and paramount to our American way of life, and America First Legal will continue to expose and pursue legal action everywhere and anywhere in order to stop the radical takeover of our education system.

“Wisconsin public schools are engaged in the malicious sexual exploitation of minor children and America First Legal is proud to be coming to their defense and the defense of their families. Eau Claire schools have adopted a monstrous plan to secretly ‘change’ the genders of children as young as 5 — without parental consent — effectively subjecting them to unnatural ideological experiments contrary to their health and biology.  This includes forcing boys and girls to share bathrooms and other private spaces without their consent, a further invasion and desecration of childhood innocence and fundamental childhood wellbeing. Adults entrusted with the care of children, entrusted to teach them about what is real and what is not, are now forcing dangerous delusions upon them. Ultimately, these children are placed on a path that could lead to chemical and surgical disfigurement and sterilization. This revolutionary crusade to remake and reshape our children—and to deny the physical and actual truth of their existence as boys and girls—must be extricated root and branch from our schools. America First Legal is leading the way in the fight to save our children from this lawless marxist indoctrination.”

“Policies like Eau Claire’s blatantly violate parents’ constitutional rights to raise their children. School staff do not replace parents while their children are at school. A gender identity transition is a major event in a child’s life; schools must defer to parents about this.”